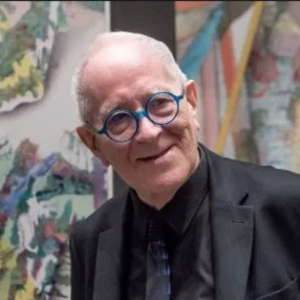 Sir Peter Cook RA (born 22 October 1936) is an English architect, lecturer and writer on architectural subjects. He was a founder of Archigram, and was knighted in 2007 by the Queen for his services to architecture and teaching. He is also a Royal Academician and a Commandeur de l’Ordre des Arts et des Lettres of the French Republic. His achievements with Archigram were recognised by the Royal Institute of British Architects in 2004, when the group was awarded the Royal Gold Medal.

He is a Senior Fellow of the Royal College of Art, London. Cook’s professorships include those of the Royal Academy, University College, London and the Hochschule fur Bildende Kunste (Städelschule) in Frankfurt-Main, Germany. Construction of his arts building, the Kunsthaus Graz (aka ‘The Friendly Alien’) in Graz, Austria (with Colin Fournier) brought his work to a wider public. In 2013 he (along with his studio CRAB) completed the Vienna Business and Economics University’s new law faculty and Australia’s newest school of architecture, the Abedian School of Architecture at Bond University on the Gold Coast.