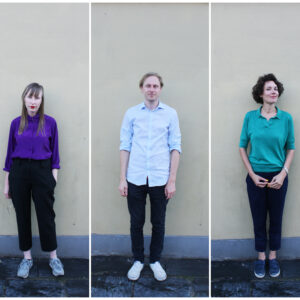 SECRETARY is an office for architecture, peopled by Karin Matz, Rutger Sjögrim, and Helen Runting. Two architects and a theorist/planner.

The practice is built on a shared interest in the capacity of architecture to facilitate a dignified life at the scale of the population. Secretary aim to produce buildings, exhibitions, research studies, and megastructures that give form to the late welfare state in the 21st century.

Karin is an architect (Edinburgh College of Art, the University of Queensland, and KTH (MSc. Arch)). She has designed a series of widely published smaller projects (Karin Matz Arkitekt), and was Project Architect for the Haganova development in Hagastaden (Vera Arkitekter). Karin is a lecturer at the School of Architecture at KTH in Stockholm.

Rutger is an architect (MSc. Arch, KTH).His work focuses on early-stage concept development in relation to architectural competitions, urban development projects, commercial events, exhibitions, film/media, and the production of architectural imagery and visualizations. Rutger is a lecturer at the School of Architecture at KTH in Stockholm

Helen is an urban planner (B.UPD, University of Melbourne), urban designer (PG. Dip.UD, University of Melbourne; MSc.UPD, KTH), and architectural theorist (PhD, KTH). She has worked with masterplanning projects in Australia, Vietnam, Finland and Sweden. Her research interests include policymaking, real estate, and aesthetics, and she has published widely in a range of international journals and anthologies.